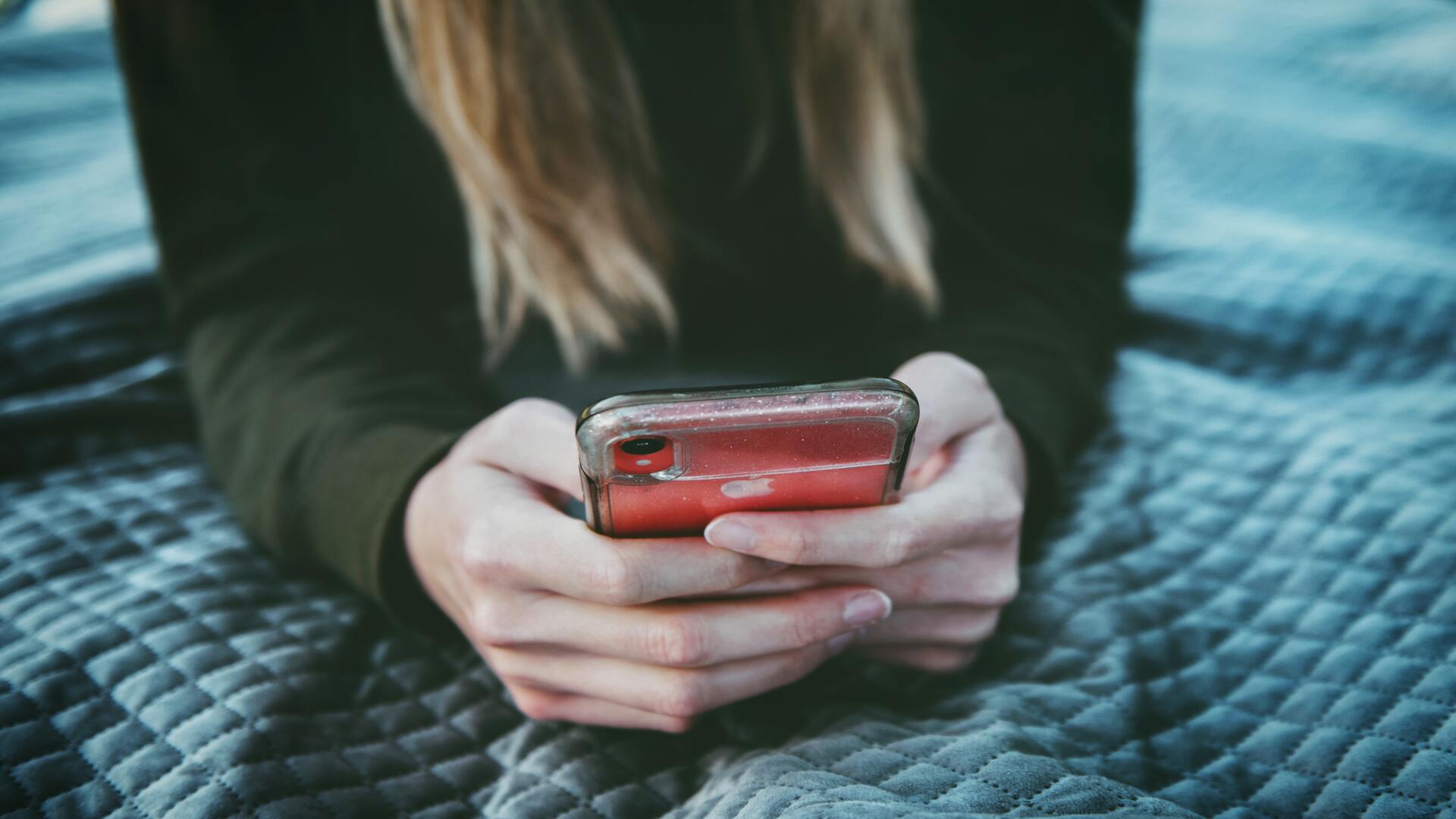 This is your ultimate guide for learning how to text a girl you don’t know, and have her excited to text you back.

The key to texting a girl you don’t know is to offer true value with your messages. This is imperative to standing out from every other average guy in her inbox. If she’s a beautiful girl, you’ll probably need to invite her to a high-status event to catch her attention.

Below, you’ll find a comprehensive step-by-step guide, teaching you how to navigate from texting a girl you don’t know to meeting her in real life.

It’s better to text a girl you don’t know using social media, rather than via SMS or a messaging app like WhatsApp or Telegram.

This is because social media is infinitely better for allowing a girl to find out who you are. Yes, it’s possible to show who you are by sending pictures or videos on a messaging app, but this simply isn’t as effective as letting her see for herself on social media.

You should use the social media app that’s most popular among beautiful young women. In 2021, that’s Instagram. This might change in the future. But, for the sake of simplicity, this guide will focus on how to text girls using Instagram.

The one downside to texting girls on social media is that users are typically assigned multiple inboxes.

On Instagram, users have ‘Primary’, ‘General’ and ‘Message Requests’.

Users are typically only notified when a message lands in their Primary inbox. To get your message to land there, the recipient will need to be following you or have replied to one of your messages before.

If that’s not the case, and your message lands in a different inbox, it’s less likely that they’ll see it. This is especially true if they have more than a couple of thousand followers.

So, if you have a girl’s phone number, it might therefore make sense to message her on WhatsApp, Telegram, or whatever other messaging app she uses initially.

However, you’ll still want to direct them to your Instagram profile eventually, so they can see your profile and learn more about how awesome you are.

What Type Of Social Media Profile Should You Have?

Your social media profile is your opportunity to quickly show you have all the traits that women find attractive.

If you’re strong, funny, wealthy, high-status, popular, confident, fashionable, desired by other women, you should absolutely have content on your social media profile demonstrating each of these traits.

What’s more, if you’re planning on inviting this girl to a cool event, you need to fill your profile with content shot there, so she can see how great it is.

Because you’re not just showing off these things to her, you don’t come across as too boastful or try-hard by stunting on Instagram. It’s as if she just happened to spot how awesome your life is. Essentially, she gets to see all of your strengths without you having to brag about them.

Some guys might choose not to create an attractive profile because:

But, if you like dating hot women you didn’t previously know, these excuses shouldn’t mean anything to you. You’d be crazy to pass up on this opportunity for these reasons.

You can create a half-decent Instagram profile by hiring a photographer and shooting photos this weekend. Get it done!

Because of the ‘multiple inbox’ problem described above, it’s usually best to initiate contact by leaving comments on her profile.

Don’t leave thirsty comments – and don’t comment on every photo. It’s important to stand out from all the simps doing that.

It’s better to sporadically drop useful comments on her most recent photos. Maybe you’ll share some travel tips about the location she has tagged herself in. Perhaps you’ll suggest how she can take better photos in that location. If she asks questions in her caption, feel free to answer them.

Ideally, these comments will help to communicate whatever value you’re offering. For example, a photographer would probably mention the best places to shoot photos nearby, a promoter would know the best places to party, etc. Maybe it’ll take a couple of messages to get on her radar, but eventually she’ll begin to recognize who you are.

Once she responds, reply again saying you’ll DM her more ideas. Now, she’s going to actively be looking for your DM.

Remember, if you can inspire her to follow you, message you first or actively look for your message, this whole task is going to be far easier.

How To Slide In The DMs

Before we get into the specifics of what your opening DM should look like, here are some important reminders;

You don’t have to satisfy these three criteria before you send your first DM, but it’ll dramatically increase the chances of a response.

In fact, you could probably put far less effort into your opening message at this point and still get a reply, because you’re no longer a stranger in her eyes.

Either way, the most effective strategy for sending a DM to a girl you don’t know is to lead with whatever value you’re offering. This means you invite her to the party, photoshoot, or event in your first message.

Beautiful women get so many cold messages, so you need to catch her attention straight away. You also want to communicate that you’re not the type of guy who has time for smalltalk. Hopefully, you’re not.

If you can show a girl how awesome you are, it’s always better than telling her.

That’s why it’s better to send a video message, rather than a text.

Go to a picturesque-looking place and shoot a video inviting her to your event.

Keep the message short and simple. Explain who you are, what the event is and that you’d like her to come along. Tell her to DM you if she can make it.

Video messages are more effective than text, because they can showcase your confidence and help her get to know you better than words on a screen. If you’re not comfortable talking to the camera, get comfortable. This will make a world of difference to your future endeavors when messaging women.

Should I Message Multiple Girls?

Needless to say, it takes a bit of effort to organize an event that girls will actually want to come to.

It’ll also be incredibly underwhelming if your crush shows up to your event and she’s the only woman there.

So, yes, the point of this strategy is to message hundreds of girls and meet dozens of them. Otherwise, the juice probably isn’t worth the squeeze.

If you’re only interested in meeting one particular girl, ask yourself why this is. It’s creepy and strange to be obsessed with one woman you’ve never met.

You’re better off stacking the odds in your favor by inviting lots of girls to the same event.

These girls are likely to be more attracted to you, because you’ve shown you’re the type of guy that multiple women like to hang around. This is called ‘social proof’ and it’s one of the most powerful attraction triggers.

So, invite your ‘one special girl’, then invite hundreds more.

If you have time, consider making a separate video for every woman you want to invite. Mention their first name in the video if you do this.

Once they reply, give more specific details about the party, such as the date and location. At this point, you may also want to consider transitioning to WhatsApp, Telegram, or another messaging app, as these are considered more personal platforms. By doing so, you separate yourself psychologically from every other desperate DM-slider.

What to do at your event

You’ll want to organize an enjoyable event, but it’s also important to be seen as the life of the party. Spend time making personal connections with all the women who show up, but don’t flirt aggressively with any particular one.

If you’ve done a good job of portraying yourself as the leader who is well-liked by many women, you can bet a lot of them will be excited to meet you again on a one-on-one date.

Take plenty of photos and videos of your event to add to your Instagram profile too. That way, even more girls will be convinced to come when you throw the next one.

What If I Don’t Want To Throw A Huge Event?

If you just want to meet ‘one special girl’, the strategy in this guide might seem like overkill. Perhaps you’re feeling too lazy to set up a party and invite hundreds of girls.

The fact remains: this is the most effective way to get the attention of a beautiful woman when you don’t know her. That’s true whether she’s the girl next door or the Instagram model with millions of followers.

Young women – even plain-looking ones – get SO MANY messages from random dudes these days. If you’re not blessed with the looks of a male model, you need something to stand out. A witty compliment isn’t going to cut it.

If you’re not willing to provide something that a beautiful woman wants, sliding in the DMs probably isn’t going to work for you.

It’s not easy to catch a pretty girl’s attention with a cold message, but the strategy detailed in this guide is your best shot. There’s a bit of effort on the front end, but it can eventually help you to attract a ton of girls you didn’t previously know.

You should be able to grow your events bigger every time you throw them. Then, once your event is popular enough, it’s possible to entice your favorite Instagram models to join. It has been done before, and there’s no reason why you can’t be next.

The world is your oyster. Think big – and have fun!